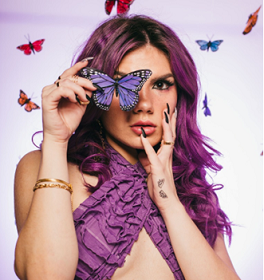 Nineteen-year-old Bailey Spinnenweber, better known by her social media moniker, “Bailey Spinn,” is one of the most popular and most influential personalities on TikTok. Her ability to create different alter egos and her P.O.V. skits showcase her comedic and acting abilities. Bailey’s video vignettes have thoroughly engaged her followers to the tune of close to 3 billion total views and 500 Million likes for her catalog of videos.

When Bailey began working with our PR team, her TikTok Following was at 7.8 Million followers and traditional media was not covering her story or her social media brand. We needed to delve deep into Bailey’s personal back story, her business goals, and what drives her online following in order to craft compelling media pitches and story angles that we felt would appeal to fashion forward media, broad news media, and pop culture media in order to help her make the seamless transition from social media star to more mainstream fashion and music stardom.

Bailey is the ultimate girl next door with edge and very talented, so luckily our challenges for this PR campaign were in short supply. Our biggest challenge was breaking through the social influencer clutter to present Bailey to top tier media outlets and key journalists as an up and coming star who has the ability to transcend platforms like TikTok to craft a mainstream entertainment career.

Bailey has come a long way, personally, from being the target of middle school and high school bullying and body image difficulties to a confident fitness enthusiast, animal welfare advocate, and leader of Gen-Z fashion trends. She also turned self-esteem issues related to social media on its head by using platforms like TikTok, YouTube, and Instagram as creative conduits to express her thoughts, feelings, artistic pursuits, and visual aesthetic, while drawing attention to things that are important to her.

We pursued this narrative while pitching to major media outlets, and positioning Bailey to fashion media, pop culture and celebrity media, and broad news and enterprise media. We then packaged her and presented her brand and her career to major Hollywood talent agencies for representation.

We achieved the following top tier media coverage and Hollywood connections for Bailey Spinnenweber aka Bailey Spinn over a ninety day period:

Collaboration with Allure Magazine – Bailey starred in Allure’s popular celebrity video series, “9 Things I’ve Never Tried Before” which featured Bailey trying 9 creative things on camera for the first time. The video played on Allure Magazine’s YouTube channel which boasts 1.74 Million subscribers, and on Allure.com, one of the biggest beauty and celebrity destinations on the Internet.

Bailey was included in a multi-page feature in USA TODAY about TikTok influencers on the precipice of stardom, titled, “TikTok stars making a Hollywood leap like Addison Rae, Charli D’Amelio.”

Bailey celebrated hitting 10 Million TikTok followers with Entertainment Tonight and ET Canada with a television segment about her meteoric rise to fame on the popular social platform. The segment aired on ETCanada.com, EntertainmentTonight.com and on ET’s popular YouTube channel which boasts 6 Million subscribers in total

Bailey did a partial television media tour, appearing on, both, morning show and evening show segments focused on her life and social media following with ABC, FOX, and NBC news affiliates throughout the U.S.

We were then able to package Bailey and present her to major “top three” talent agency, ICM and, ultimately, got her signed with ICM as a client.